To Arbitrate or Litigate? 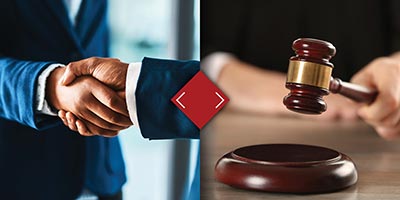 Clients frequently ask whether they should specify arbitration or litigation as the dispute resolution method in their contracts. Of course, the answer is one of the most hated of lawyerly answers — it depends. There are advantages and disadvantages to both methods of dispute resolution.

The conventional wisdom is that arbitration is the better choice because it is less expensive. But this is not necessarily true. Arbitrations administered by agencies like the American Arbitration Association have filing fees that can be in the thousands of dollars, while court filing fees are usually only hundreds of dollars. In arbitration, the parties pay the arbitrator’s fees. In complex matters, arbitrations are often decided by a panel of three arbitrators, each of whom bills by the hour. In contrast, judges in court are paid by the taxpayers. Courtrooms are also provided by the taxpayers, while arbitrations often occur in conference rooms that are rented by the parties. Administration of arbitrations is unquestionably more expensive for the parties than court-based litigation.

Arbitration’s reputation as a cheaper alternative to litigation stems from its less formal nature. Court proceedings are governed by strict rules of procedure and evidence. Arbitrations have rules too, but those rules are generally more relaxed. The result is that there are fewer disputes over procedural technicalities in arbitration, allowing the parties to concentrate more on substance than form. Arbitrations usually move faster than court proceedings, which also saves the parties money on attorneys’ fees.

Limitations on discovery are the biggest driver for cost savings in arbitration. The courts have rules that permit wide-ranging discovery of evidence through several means, including written interrogatories, subpoenas, requests for production of documents, and depositions. All too often, the cost to respond to discovery can equal or even exceed the amount in controversy. The amount of discovery permitted in arbitration varies widely depending on the applicable arbitration rules and the arbitrator. The AAA’s Fast Track Rules, for example, do not permit any discovery. That being said, there is a trend in arbitration to generally allow for more discovery, which reduces or even eliminates the cost advantage of arbitration.

In addition to the above cost considerations, there are three non-monetary factors parties should consider when negotiating a method of dispute resolution:

1. Control. In court proceedings, the parties’ fates are controlled by the judge assigned to the case by the court. That judge will probably be fair, smart, and hard-working, but the judge may not have a background in the area of dispute. Many judges rotate between assignments, including criminal and family law matters. As a result, the judge may not be in the best position to handle a complex commercial dispute.

In contrast, the parties to an arbitration have input on who will decide their dispute. Arbitrators do not have to be lawyers. The parties can choose someone with knowledge of their industry to decide the dispute.

2. Finality. Court proceedings have mechanisms for appeal. Judges and juries make mistakes, and appeals allow for correction of those errors. But that takes time and money. Arbitrations do not typically have appeals. Overturning a bad arbitration award is very difficult, so if you have a bad day at arbitration, you may well be stuck with the result. There is a fundamental trade-off between the ability to potentially overturn a bad result and the time and expense to reach a final resolution.

This is a very brief overview of complex issues that can affect you and your company. Before signing any contract with a dispute resolution clause, you should talk with your Moss & Barnett attorney about what dispute resolution method is right for your situation and how contract language can be crafted to achieve your goals.