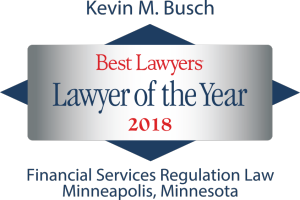 Moss & Barnett is pleased to announce that Best Lawyers has named Kevin M. Busch, chair of Moss & Barnett’s banking and commercial transactions team and a member of its business law and mergers, acquisitions, and corporate finance teams, as the 2018 Minneapolis Financial Services Regulation Law “Lawyer of the Year.”

Only a single lawyer in each practice area and designated metropolitan area is honored as the Best Lawyers’ “Lawyer of the Year,” making this accolade particularly significant. Lawyers being honored as “Lawyer of the Year” are selected based on particularly impressive voting averages received during the exhaustive peer-review assessments Best Lawyers conducts with thousands of leading lawyers each year. Receiving this designation reflects the high level of respect a lawyer has earned among other leading lawyers in the same communities and the same practice areas for their abilities, their professionalism, and their integrity.

In addition to chairing Moss & Barnett’s banking and commercial transactions team, Kevin serves as Moss & Barnett's chief operating officer and is a director on its board of directors. Since 1981, Kevin has practiced in the areas of bank regulation, commercial lending, real estate lending, and UCC. He has been repeatedly listed in The Best Lawyers in America and Super Lawyers. Kevin was also named a Best Lawyers’ Minneapolis Financial Services Regulation Law “Lawyer of the Year” in 2015.

Since it was first published in 1983, Best Lawyers has become universally regarded as the definitive guide to legal excellence. Because Best Lawyers is based on an exhaustive peer review survey in which more than 36,000 leading attorneys cast almost 4.4 million votes on the legal abilities of other lawyers in their practice areas, and because lawyers are not required or allowed to pay a fee to be listed, inclusion in Best Lawyers is considered a singular honor.