Did You Know? (featuring Wayne A. Hergott and Saint John's University)

Wayne A. Hergott, a retired Moss & Barnett attorney, was awarded the Father Walter Reger Distinguished Alumnus Award at the Saint John’s University homecoming banquet on September 16, 2016. The award is the highest honor bestowed by the Alumni Association and salutes a key alumnus in the name of Fr. Walter Reger, OSB (1894-1971), who was the long-time secretary of the Alumni Association. After the death of a SJU football teammate in 2009, Wayne invited a few fellow alumni for lunch in the Twin Cities and became the official convener of the “Lunch Bunch,” a growing group of “Johnnies” that meets monthly for socializing, lunch, and a speaker.

When Wayne started at SJU in 1953, he was Coach John Gagliardi’s first quarterback. He played four years of baseball and was a member of three championship teams. Wayne served in the military before pursuing law school at William Mitchell College of Law and embarking on a 31-year career as a civil trial attorney at Moss & Barnett. After retiring from law, Wayne earned his master’s degree in spirituality from St. Catherine University and then enjoyed an additional career as a spiritual director and retreat leader.

We offer our heartfelt congratulations to Wayne on this well-deserved recognition! 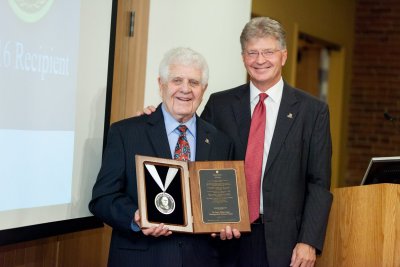 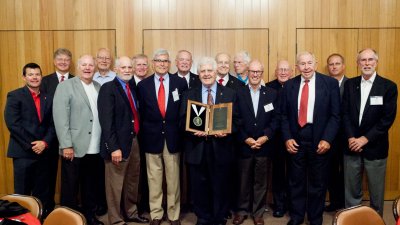 Wayne Hergott and the "Lunch Bunch"*