Tom serves as Moss & Barnett’s Chief Executive Officer and chairs Moss & Barnett’s nationally recognized accountant law team. He represents several national, super regional, and regional accounting firms, national corporations, businesses, and professionals. In 2017, Shroyer was awarded an honorary membership in the Minnesota Society of Certified Public Accountants – only the fifth time in its history that such an honor was bestowed to a non-CPA. He has been repeatedly listed Best Lawyers and Super Lawyers®. 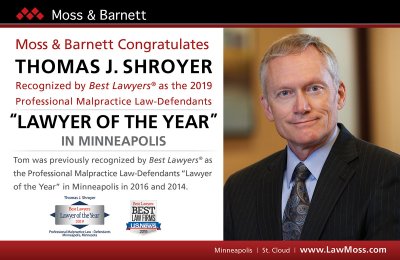